I remember my first science fair. I was a shy, long-haired 6 year old who was dipping tea bags into fruit juice to see if they had iron (fun fact: if they got cloudy, they did). It was an experiment out of my ‘Science Experiments You Can Eat’ book, which I still use to this day. Though I don’t aspire to be a scientist now, until the first time I picked up a camera that was what I wanted to be when they asked what I wanted to be when I grew up. I like to attribute this to my immense curiosity and desire to know everything – a trait that has only intensified as I grew older and the internet diversified.

So once I got the phone call from my sister asking for help on my niece’s Kindergarten science project, you bet your socks I was going to get on that. As an hommage to my glory days (laugh) in elementary school science fair, we decided on a juice density project.

Originally, I pulled from pinterest and saw this “juice layering” project and I thought it would be cool for Soap to see juices layered over each other. I explained that the heavy juices would sink to the bottom and the lighter ones would stay to the top. So she guessed which juice would sink to the bottom in grape vs. apple and so on, and then tested that by pouring two juices in each cup. It was really neat to see where the juice was going to go after pouring it in. Click to see it in action.

After that initial experiment, we tried to layer the juices in a cup by density…to no avail. After much trial and error (including 2 days where I did it on my own), I couldn’t even figure out how to layer water on top of grape juice. So, I nixed that aspect of the project and had her focus on two juices in multiple cups. This turned out in our favor and simplified the project, which was to understand that some juices are heavier than others and some might mix together because they are the same density.

There was a little struggle in getting her to connect all the dots when explaining her experiment. However, I think that might come with the territory when a child has never been introduced to the scientific process before and I’m not sure that she had. Honestly, I was kind of skeptical that a child should be required to go into the science fair in Kindergarten, especially if there had been no introduction to science experiments prior. She seemed to second-guess herself a lot and ended up not wanting to answer questions because she was scared to be wrong. So I did have fears that she would be too scared to talk to the judges but after some practice she seemed comfortable enough in her answers. 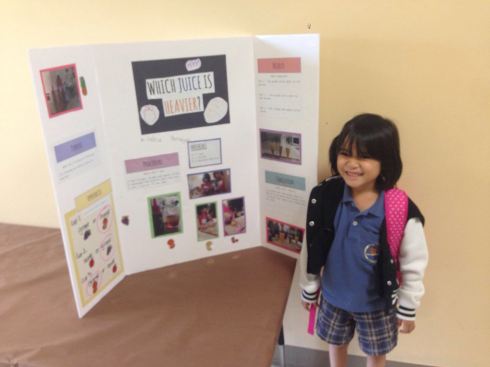 Did she end up taking a place in the awards? No. But she was happy and sooo excited about the experiment. She told me about talking to the judges and after school, I went and took a picture of her with her board. I think all in all, it was a good experience and I would like it to lead to her becoming more curious about science. Perhaps, we’ll spend this summer working on a few more experiments or just exploring science in general. And maybe she’ll have a career in STEM one day…or maybe she won’t…but at the very least she will understand how important it is that girls become interested in STEM. That’s really all I could ask for.

I am as simply or as complexly as you make me: the control freak, the jolly realist, the observant and highly opinionated. I like all things art, emotion, love, and passion induced. View all posts by Ruzelle Almonds

A young gun who decided to use a digital platform to document my mistakes and accomplishments. I am a storyteller who aims to incite change in perspective and patterns through my different means of telling those stories, even those which aren’t mine.